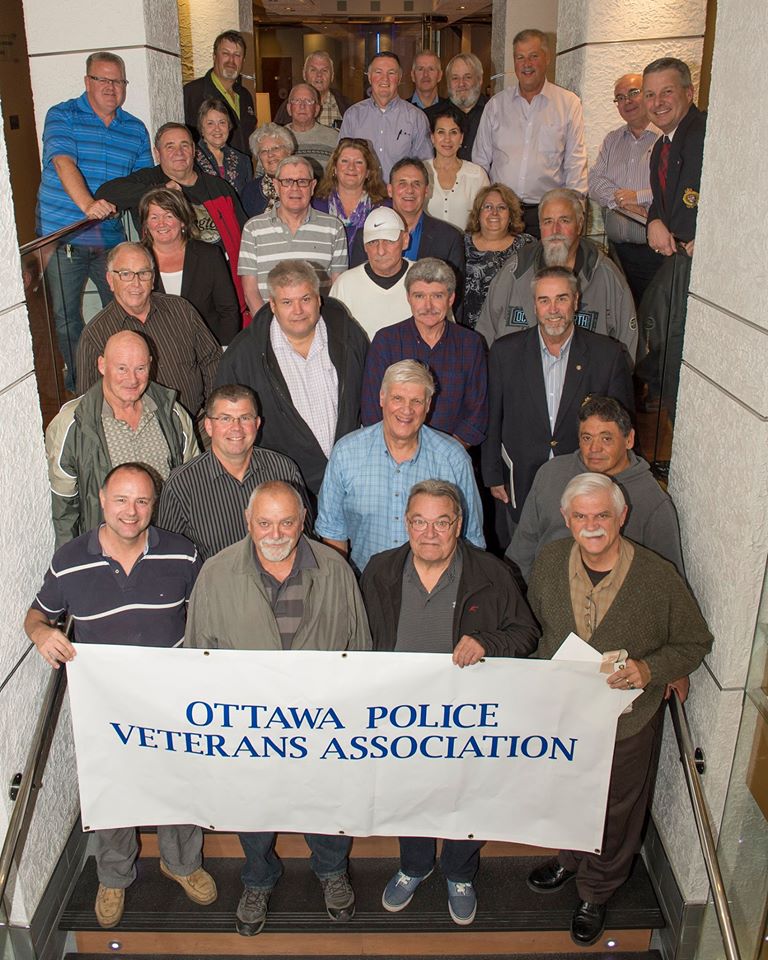 The Ottawa Police Veterans Association (OPVA) are now almost 300 strong in retired and former members of the Ottawa Police Service (or pre-1999 amalgamated police services within the current city of Ottawa).  They are united for the purpose of honouring those who served and strengthening the lifelong link between all of them. The OPVA is and has always been led by a volunteer Board of Directors.

This organization grew out of an OPS Committee in 2012.  The OPS formed the “Honour, Courage, Service” Committee under the leadership of then Deputy Chief Ed Keeley.  Its overall purpose was to strengthen pride and ‘esprit de corps’ within the police service towards a challenging future.  The newly minted core values within the Committee’s name, were at the heart of all 5 sub-committees, namely:

The Veterans & Retirees sub-committee was chaired by then Staff Sergeant Brad Hampson, whose subsequent consultation and work researching best practices across Canadian police services, led to the formation of an ad hoc Board of Directors of retired OPS veterans, for the purpose of forming the current Ottawa Police Veterans Association.  With great assistance of the Ottawa Police Association (which continues presently under President Matt Skof), the first Board, including Co-Chairs Mark Hayes and Byron Smith, started the building process. Member Scott Lawson assisted greatly in the start-up as well. The OPVA is and has always been led by a volunteer Board of Directors.

The first Board of Directors was confirmed in 2014 at the first Annual General Meeting (AGM) held in October of that year. With extensive financial and legal assistance from the Ottawa Police Association, a constitution was developed along with granting of provincial incorporation as a not for profit corporation on 17 June 2015, officially forming the OPVA.  Annual elections are held at the AGM for 9 positions on the Board of Directors and a Constitution and By Laws were created to manage OPVA business.

The objectives of the corporation in short, listed the following:  to unite fraternally, to support the mutual interests of retired and former civilian and police members, to provide mutual moral support, to work with other authorities in achieving mutual aims, to promote the members’ interests and fundraise in accordance with the Directives of the Association, and to encourage and promote cooperative enterprise amongst the members in the attainment of all the objectives listed.

The OPVA is extremely popular with their members, and are consistently recruiting new Association members.  All enjoy a real sense of fraternity/sorority with mutual interest in continuing to serve the community and the well-being of those who have served in policing and either retired or left the Service in good standing.  All enjoy the fostering and strengthening of social connections and are still seen as important members of their own police family.  In addition, these formal associations provide for much needed support into the golden years of life.

The OPVA members meet for social events throughout the calendar year enjoying dining and entertainment at the Ottawa Police Association lounge. They donate and assist in local charitable causes giving back to the community, and provide wellness and peer support to their own and other retired Ottawa Police Service veterans and their families.